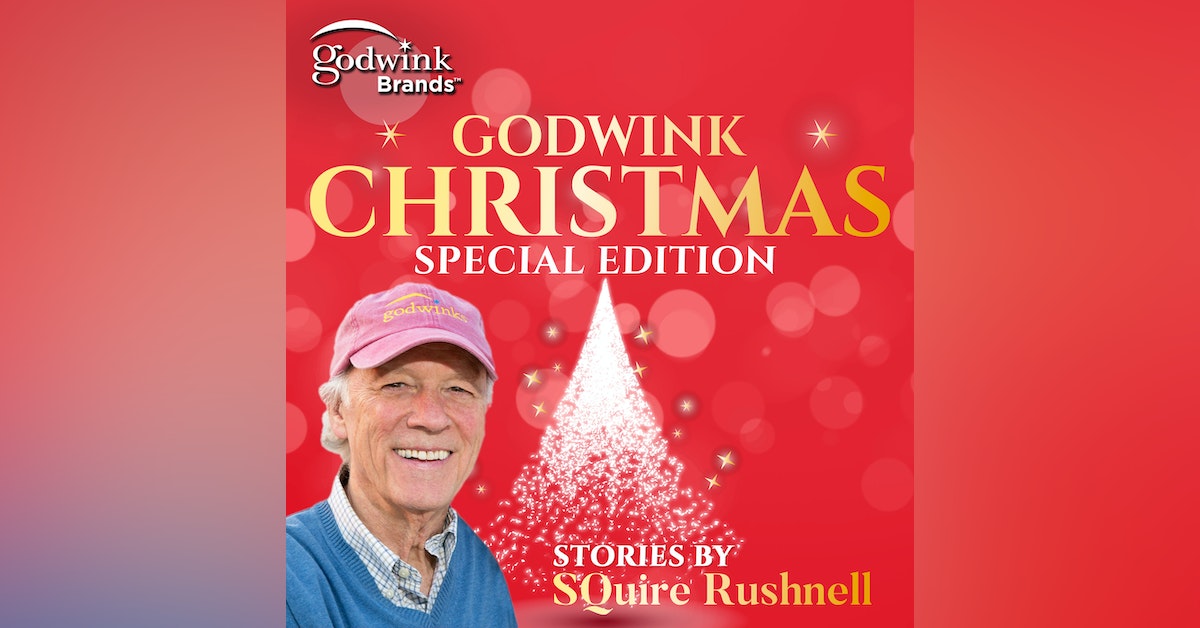 Episode 2. Carla thought her marriage was over. With Christmas only days away, a friend's invitation changed the course of her life. Find out what Godwink happens on today's Godwink Christmas Stories podcast!

Today's Godwink Christmas Story Podcast and more can be found at https://Godwinks.com. Join our private Facebook group at http://godwinkers.com!

[00:00:06] Carla had realized that this group of strangers had each taken one of their gifts and put her name on it so she would be welcomed into their family and have something to open on Christmas morning.

[00:00:41] My marriage is a wreck, cried Carla. It didn't seem possible that the images of a blissful life together that she had imagined on her wedding day only three years earlier were now crashing upon the shoals of life, helplessly broken. Separating from her husband seemed like the only reasonable option for her. It was terrible timing with Christmas only a few days away, but she had no choice. She was desperate. What would she do? Where would she go? She couldn't bear the thought of telling her family what was going on. It was still too painful. The last thing she wanted was to face a flurry of family questions that she couldn't answer or to provide explanations she didn't have. One of Carla's coworkers, Sally, reached out to her and offered her a place to live while she sorted things out. Carla was very grateful. Yet it seems strange leaving the house that she and her husband had fixed up to perfection and moving into someone else's home, sleeping in a twin bed in a tiny, low ceilinged attic room. She remained torn should she call her family. No. Every time she thought about it, she concluded that it just wasn't the right time. Not Christmas time. Sally could feel her friend's heartache. She could see it in her face and hear it in her voice. She invited Carla to her mother's house to join Christmas Eve with her family.

[00:02:23] Carla declined, saying she would prefer to stay in her attic room by herself. Trying to make a joke of it, she told Sally. I'm very grateful for your offer, but I just want to spend Christmas Eve wallowing in self-pity, bingeing on old movies and eating cold pizza. What she really meant to say was I have nothing to celebrate. I feel lost, confused and alone. On Christmas Eve, Carla said goodbye to Sally, wished her merry Christmas and then went up to her room. She wondered if God was watching curled up on the twin bed. She prayed, asking for a sign that things would work out. At 8:30 p.m., The phone rang. It was Sally imploring her to change her mind to come spend the evening with her family. She said that they had all decided it wasn't right for Carla to be alone on Christmas, and everyone was urging her to come over. It's only a 30 minute drive, insisted Sally. Come on, it'll be good for you. Trying to resist, Carla kept clinging to her private pity party, even though it wasn't much of a party. Then she surprised herself upon hearing another part of her say, almost involuntarily. Oh, OK. It was cold, windy and snowing as she scraped the windshield just enough to see through it and slipped into the car, squinting, hugging the wheel, the road barely visible ahead of her.

[00:04:06] Carla kept punishing herself for being weak and succumbing to Sally's coaxing. It was nearly 9:30 by the time Carla found Sally's mom's house and made her way to the front door. As she walked into the house, she felt more depressed than ever. There was a family of brothers, sisters, cousins, aunts and uncles, all having a great time celebrating together, she thought. They're all strangers to me. I'm the proverbial fifth wheel. Carla couldn't believe it when Sally handed her a warm plate. Mom saved you something she thought you needed a home cooked meal, said Sally with a smile. Fact was, Carla was hungry and the food tasted good. As the evening wore on, Carla began to warm up, open up and to go with the flow. Pretty soon, she was laughing and enjoying being with everyone in the family. At one point, one of the uncles announced that he had checked the weather conditions and all the roads were closed. Those who had been planning on going home for the night would have no choice but to hunker down and stay. That brought on a flurry of chatter, some voicing disappointment, others joking that it would save them a trip back the next morning.

[00:05:28] Sally and her mother handed Carla a sleeping bag and pointed to a spot on the living room floor as she tucked in for the night. Carla felt out of sorts all over again, saying to herself, What am I doing here with strangers on Christmas Eve sleeping on the floor? Eventually, she gave in to her emotional exhaustion and drifted off to sleep noises in the kitchen, caused her to stir and realize that Christmas morning had arrived. She wasn't ready to get up and greet anyone, cheerily pulling the sleeping bag up a bit more. She pretended to remain asleep. Now, what should I do? She wondered. She entered into a state of dread imagining the family running around gaily opening presents while Miss fifth wheel huddled in a corner trying to make herself inconspicuous. Squinting through one eye, she could see that there was a lot of movement now in the living room. People in PJs, some borrowed, were gathering around the tree, becoming more vocal and excited. How long can I stay in this sleeping bag? She wondered. Now she could hear them calling out names and handing out presents. God, let me vanish, please, Carla. What? Why are they calling me Carla? Here's a present for you. How can that be? She thought as she opened her eyes and sat up.

[00:07:18] Someone came toward her, handing her a present wrapped in red tissue paper. Someone's name had been crossed out and Carla had been written in. She was stunned and speechless. But before she could finish opening her gift, her name was called again. Carla. Another one for you. Someone else delivered Carla's second gift. This one was wrapped in a colorful golden green striped paper with a red ribbon. Again, the tag had someone's name scratched out and written in was Carla. And so it went. Carla had realized that this group of strangers had each taken one of their gifts and put her name on it so she would be welcomed into their family and have something to open on Christmas morning. I can't tell you the feeling of warmth, love and acceptance I felt at that moment, said Carla, when she reflected on that day. This was by far the closest I had felt to the true meaning of Christmas that I had ever known. She remembered that she had prayed for a sign that morning with those people. I saw the human manifestation of God's love. I was meant to be there to experience it. That was my sign. I Godwink attesting that no matter how low you feel or what troubles you may have, God is always right there, right next to you.